Therapy can be provided face to face or via video conference

This article appeared in the The Weekly Times, Feb 7, 2018 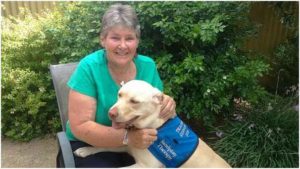 By ALEXANDRA LASKIE, The Weekly Times

CLINICALLY speaking, Neta Kirby’s next client was a female victim of neglect and abuse. She was also a three-year-old, a pre-schooler who knows the difference between feeling happy, sad, afraid or angry.

A sandplay therapist, Neta has a voice as warm as a big hug and speaks to everyone with the familiarity of a doting aunt. But the little girl would not say a word of the memories that haunt her, or even use Neta’s miniature figurines — smooth, blue translucent pebbles, a plastic elephant, a miniature, unclothed newborn baby — to map out her world in a small sandbox.

Then Neta brought in her co-worker, Connie.

“This little girl lay down next to Connie, lifted her ear and told her all sorts of things that had gone on in her life,” she says of the child’s reaction to her Golden Retriever-Labrador cross.

Neta talks of a 10-year-old boy who had to attend court and face his father, the accused, wetting himself in a silent fit of anxiety in the courtroom.

“He said luckily there was a really nice man there who helped him find new clothes, ‘But you know what Neta? If I had Connie, I’d have been better’, he told me,” she says.

Then there was the Kinglake boy who was referred to her almost five years after the 2009 Black Saturday bushfires who had grown up particularly quiet. “He doesn’t smile much,” his mother had said of her son.

“He came in and just gave her (Connie) the biggest hug,” says Neta, who lives in Tatura in the Goulburn Valley. “His mum rang me that night and said, ‘He’s been chatting away and smiling’. Connie just has this innate ability to know when someone is stressed or anxious and she’ll give them a cuddle.”

Connie is one of a handful of dogs former veterinary nurse-turned-dog trainer Tessa Stow has trained as a “support dog” to provide comfort for victims and witnesses of crime when testifying in court.

She came into Neta’s life not long after the councillor met Tessa at the Goulburn Valley Centre Against Sexual Assault in Shepparton. Tessa had suggested she take Coop, the first specially trained “support dog” in Australia, to accompany her when seeing clients.

It took only a few weeks before Neta was convinced of the benefits of having the canine around that she asked Tessa about having her own. “Spending time with a dog can significantly aid the physical, mental, social and emotional aspects of a person’s wellbeing, it really works”, Neta says. Enter 12-month-old pup Connie, whom she now refers to as her co-worker.

The pair underwent training together with K9 Support, Tessa’s dog training business she operates out of her and husband Scott’s Warrenbayne beef cattle farm, and now two-year-old Connie accompanies her wherever her work takes her, from high schools to hospitals, as well as two days a week at Merrigum Pre-school, 30km west of Shepparton, where Neta is a kindergarten teacher.

More recently, Connie has made regular appearances at Shepparton court. The visits are part of a plan to follow in the footsteps of Tessa’s dog, Coop, and have Connie accompany witnesses and victims of crime as they give evidence. Since last September, Coop has comforted people testifying in remote witness rooms at Victoria’s Office of Public Prosecutions.

Like Tessa, Neta’s ultimate aim is to get dogs into the courtroom. “We’re just chipping away,” she says. “We follow the US in so many ways,” referring to the US’s 155 support dogs who work in courts across 35 of the country’s 50 states. “Why can’t we do it this time?”